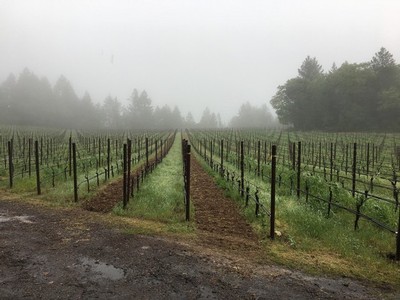 An unusual April storm has brought several more inches of rain, so we’re worrying less about a return to full-bore  drought.  With a little more rain in the forecast, it looks like we’ll come out with around 75% of normal rainfall – which assumes “normal” still exists.  The key thing is having a storm big enough to completely saturate the fields at least once during the rainy season – we definitely got that, so should be fine for the growing season.  Spring is also the time to plant replacement vines – there’s nothing more frustrating than farming a vacant location in a vineyard.  These Sauvignon Blanc replacement vines arrived Friday.  They’ll be lounging under an oak tree for the next week or two to acclimatize to their new home, but they all should be in the ground before the end of the month.