The Pool Block is a 1.5 acre vineyard located at the northwestern corner of the property adjacent to the Heitz ranch.  The block was planted to Petit Sirah when we arrived in 1955.  (Five ancient Petit Sirah vines still grow on the eastern edge of the vineyard  -- just a remembrance, as the Petit Sirah clusters are dry raisins by the time the Cabernet Sauvignon is ready for harvest, and none have ever qualified for the picking bins.)  The block was unfenced when we arrived, so most of the vines were nibbled to death by deer within a decade.  (Likely, preceding owners had used less deer-friendly vineyard management techniques.)  More recently, we fenced the area -- which includes the original house site -- and in 1997 replanted the field to Cabernet Sauvignon (Clone 8 on 110-R rootstock).  Lying at approximately 600 to 650 feet of elevation, The Pool Block faces west across the Napa Valley – the view is roughly along Zinfandel Lane.  The soils are primarily vocanic Rhyolite.  The boundary of the St. Helena AVA is a few hundred yards down the hill from the Pool Block at the 300 foot elevation contour line.  Since 2012, the fruit from the Pool Block has gone into our Caberrnet Sauvignon "The Ranch." 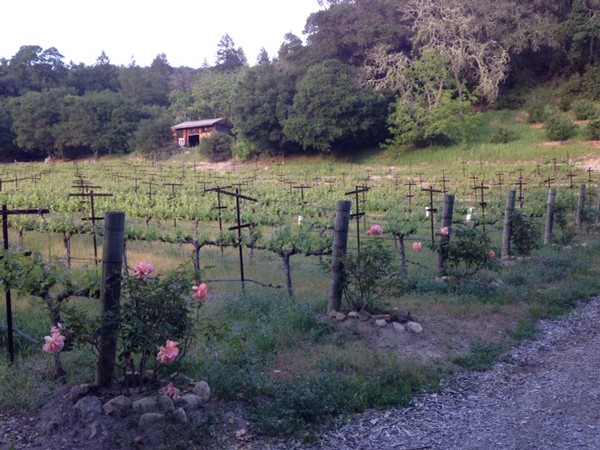