Late in California’s Gold Rush, one Levi Philander Davis (1835-1881) moved to Sierra County in California from his native Ohio to set up a mining camp at Indian Hill.  He subsequently relocated to Sacramento where he met Lucretia Ella James.  The couple married and in 1878 came to the Napa Valley.  Attracted to the hills on the east side of the valley, they filed under the Homestead Act of 1862 for ownership of a 160 acre parcel at the end of what was then called Spring Valley Road.  The Homestead Act promoted the settlement of new areas, allowing prospective farmers to acquire land by filing for ownership, paying a small fee, and then perfecting title by occupying and farming the property.  The Davises planted the first wine grapes on the ranch in 1878 and by 1880 had cleared 75 acres for vineyards and orchards.  Following Levi's death in 1881, Lucretia sold the property to Melchior Kemper, who continued to plant the cleared areas to vineyard -- by 1891, 60 acres of vineyard were producing Zinfandel, Malvoisie and Chasselas. 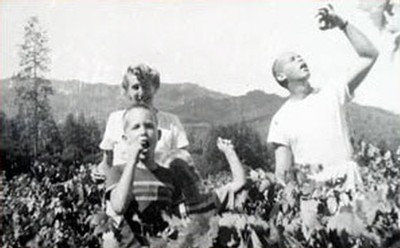 In the ensuing fifty years, a succession of events battered wine growing across California: phylloxera, a lethal root louse, moved through the vineyards; Prohibition outlawed the production and sale of most wines; and the Great Depression and World War II hampered the wine industry’s recovery.  The Snowden ranch was not spared – by the time Wayne and Virginia Snowden purchased the property in 1955, only thirteen acres remained under active cultivation – seven acres of vineyards planted to Petit Sirah and Palomino or Chasselas; and six acres of prunes, walnuts, and apricots.  Most of the remaining acreage originally planted by Davis and Kemper had reverted to woods and forests – accented by the occasional redwood grapestake and the gentle undulation of the forgotten vinerows.

Wayne and Virginia Snowden, together with their two small children, Scott and Randy, began coming to the Napa Valley for summers in 1952.  The first summer, the family lived in a house on the north side of Lodi Lane on the site of what is now the Wine Country Inn.  That year, Wayne and Virginia began to explore the wines of the Napa Valley -- most often visiting the two closest wineries: Domingos, a family operation that produced wine before and during Prohibition in a dirt-floored stone cellar that is now a part of Elhers Lane Winery; and Charles Krug Winery.  In 1953, the young Snowden family lived in a house on Sanitarium Road above St. Helena Hospital and frequently purchased wine at nearby Souverain Cellars.  Souverain was one of the earliest "new" post-Prohibition wineries, created in 1943 by J. Leland Stewart in an abandoned winery building that today houses Burgess Cellars.  Through the Souverain wines, Wayne and Virginia began to explore varietals -- White Riesling, Green Hungarian, Zinfandel, Petit Sirah ... and Cabernet Sauvignon.  In 1954, the family lived in The White Cottage on White Sulfur Springs Road on the west side of the valley just south of St. Helena.  The White Cottage was located on the edge of the venerable Hayne Zinfandel Vineyard -- ancient then and, remarkably, still in production today.  Louis M. Martini was the most convenient winery that summer.

After three summers, Wayne and Virginia had developed a sense of the valley and began searching for a place to own.  They looked at innumerable parcels around the Napa Valley -- most of which were too expensive -- and gradually narrowed the search to two possibilities: a hill on the west side of the Silverado Trail about half way between St. Helena and Calistoga -- now the site of Rombauer Cellars -- and a larger but more remote parcel in the hills on the east side of the Silverado Trail between St. Helena and Rutherford.  They eventually settled on the latter site, which they purchased in the spring of 1955 from Albert Amasa Eisan and his wife Josephine.  The 160 acre ranch had been in the Eisan family since Albert's mother, Jane Ellen Taylor Eisan, purchased it from Melchior Kemper in 1895.  Along the south boundary of the property, Albert's uncle, Ward Eisan, owned a similarly sized parcel which was even more remote than Albert's -- access to Ward Eisan's property was through Albert's.  Today, Ward Eisan's ranch is the site of Rutherford Hill Winery, Auberge du Soliel Hotel and Restaurant, Katheryn Hall Winery, and Sloan Winery.

In the early 1960s, Wayne planted approximately six acres of Cabernet Sauvignon on the site of a long-abandoned orchard at the "top of the property" -- the relatively flat area at the top of the mountain ridge between the Napa Valley proper and Conn Valley.  He obtained grafting wood from Nathan Fay, who had recently developed his own vineyard in the Stag’s Leap area.  Wayne had to overcome a number of challenges, including difficult dirt roads which restricted access to the vineyards, jack rabbits, which were attracted to the young shoots of new grapevines, deer, which ate the leaves of young and old vines alike, and a very limited water supply -- while the vineyard was being established, Wayne transported water to the young vines in 30 gallon garbage cans in the back seat of an old Oldsmobile convertible.  Wayne’s vineyard was situated in what is today the eastern portion of The Brothers Vineyard.

Following Wayne Snowden’s death in 1977, Virginia gave sons Scott and Randy Snowden responsibility for the property.  In 1981, they removed all of the then-producing vineyards and orchards and replanted them to Cabernet Sauvignon, utilizing budwood from Jordan Vineyards near Healdsburg.  Through the 1980s, they sold grapes from the resulting 11 acre vineyard -- today called "The Brothers Vineyard" -- to Stag’s Leap Wine Cellars. During that time, the family worked closely with Warren Winiarski, owner of Stag's Leap, and his acclaimed viticultural consultant, Danny Schuester, to optimize trellising, training, and cropping of the vineyard, track cultural variables and correlate them to wine quality.

Beginning in the 1990s, grapes from the property went to a number of other vintners, including Silver Oak Wine Cellars, Frank Family Vineyard, David Ramey, Viader, and Caymus Vineyards.  Commencing with the 1993 harvest, the Snowdens began to retain a portion of each harvest for the production of estate-specific family wines.  Gradually, an increasing amount of the grapes produced from the property are being used in Snowden wines.